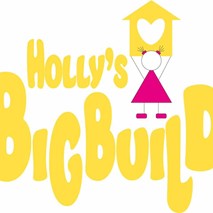 Holly’s parents, John and Louise, had a dream for several years to extend their current home to make it more accessible for their daughter, who suffers from a neurological disorder known as Angelman Syndrome. The condition causes significant learning disabilities and speech problems. Although Holly is mobile, she developed some mobility issues and behavioural challenges that meant the original family home was no longer a practical or safe space for her to live.

The family wanted to adapt the ground level of their home to create a double extension that included a bedroom and bathroom on the same floor. Holly needed to gain more independence and move safely around her living space without having to use the stairs, which posed a high risk. An extra room was also required on the sub ground level, to accommodate a carer overnight.

However, the fact that the family home was set on the side of a steep hill, meant the build was risky and brought various challenges with it. It meant no one was particularly keen to take the challenge on; that is until the family were introduced by a mutual friend to Luke Harman.

Luke and the Master Builder team at LP Harman Building Services Ltd, had the vision to take on the project and make it happen.

“When we first met Holly and her parents to discuss the project”, says Luke, “they explained how various builders wouldn’t take the build on. We knew this was a project where risks were involved and that it would be a fragile job that had to be handled with care and precision. It was also a job we wanted to be part of as it was going to make such a difference to their lives.

The project was underway. In order to create the space that was required for the family, the team had to dig below the existing house foundations and out into the rear garden. This meant that three vital banks surrounding them had to be held up and secured to ensure everyone’s safety. The bracing was adapted as they went along and a box frame was created to hold up the sides. The slope of the existing ground level was so steep and the amount of mud that had to be removed so vast, that a conveyor belt system was used to remove it from the garden.

“The weather really wasn’t on our side during the groundworks of this project”, explains Luke. “It was crucial that the ground remained dry, so we arranged for a tin top roof to be constructed over the garden to keep the build going. This wasn’t in the original plan, but it was fundamental to keep the site safe. If the surrounding banks were to have gotten saturated, it would have jeopardised the whole job and the safety of the family’s home, as well as the neighbour’s property. The communication and quick thinking of all the team was unprecedented and they got the concrete poured and grounds secured.”

A Visqueen damp proof membrane was added to make it completely waterproof, ensuring the new sub level doesn’t suffer any damp penetration in the future.

During the build, Holly would spend a lot of time excitedly watching the progress made. She taught the team how to sign words and in particular how to ask for tea and biscuits; an integral part of any build! She became so much a part of the team, that she earnt herself her very own LP Harman Builders hoodie. 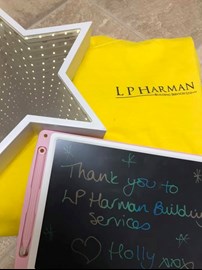 “The build was a collaboration of absolutely amazing efforts from our team, the sub-contractors we use, our suppliers and so many companies that just wanted to help see out this project and support the family”, says Luke.

The completed project has created so much freedom for Holly. The family can manage their daily lives comfortably and in the knowledge that Holly is in a safe environment she can enjoy. The spacious living area features bi-fold doors that lead onto the new patio area and a resin path has been added at the side of the house with safety railings. Holly’s bedroom and bathroom were created with all her needs in mind and a sloped entrance was added into the existing house to make it safer for her. A roof lantern was also installed to allow light into the new hallway upstairs which links to the custom-made staircase separating the two floors.

“It was such a pleasure to have Luke and his team on site throughout the whole build”, say Holly’s parents. “Any issues or problems were dealt with swiftly and Luke always found a solution and kept us informed. His knowledge and technical skills are second to none and it meant we knew we were in safe hands and the build would be of the highest quality. Luke clicked with Holly straightaway and understood that the whole build was about meeting her needs. Everything was planned with Holly in mind and her accessibility and safety. We are beyond thrilled with the build and our lives have been transformed now the extension is complete. Holly has just had an operation on her foot and logistically, her recovery would not have been near impossible at home, without this adaptation. Holly can move around the main living areas independently; she has an accessible bathroom and bedroom and space for her to play and relax by herself whilst still in fairly close proximity to us. As Holly grows older, her independence will blossom because of this build and what is has given her, and any future issues with her mobility will be catered for. We are so grateful to Luke and his team for going above and beyond on this project.... it’s no wonder that Holly always signs ‘superhero’ when she sees Luke!” 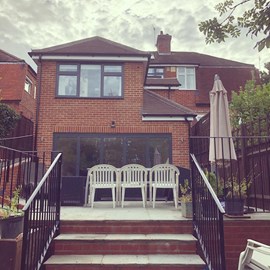 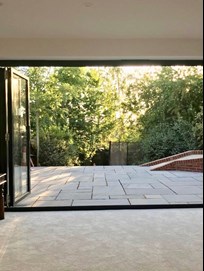 LP Harman Building Services Ltd is a member of the FMB and insures its builds through FMB Insurance. Visit their Facebook page to see more about this fantastic project. You can also visit the website to find out more about the company. Visit https://www.lpharmanbuildingservicesltd.co.uk/